Downside of country living – Part 72 (or whatever)

I never intended this blog to be about the downside of country living and I don’t want to give the impression that it’s ALL bad.  Not at all, there’s the mountain and the birds and … the mountain and birds and sundry other wildlife, including my small feral colony of 14 cats, all healthy, adorable and most importantly sterilised. 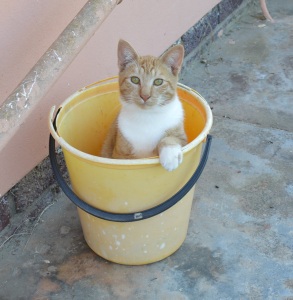 Last Sunday a bag of bones vaguely resembling a sick injured cat walked into my kitchen and sat down.  If cats could talk he would have said “please help”.

I knew this cat well, he was not my favourite, for years he had terrorised my cats, chasing and biting them and I suspect he chased my little blue eyed kitten into an enclosure of huskies where she died.  But it would take a heart of stone to pitch this poor creature out into the rain.  He was completely emaciated, his eyes were gummed shut and his entire face, head and ears were a mass of sores and scabs.  I put him in a quiet room with food and water and waited until Monday to speak to the vet.

This is what he looked like in his healthier days. 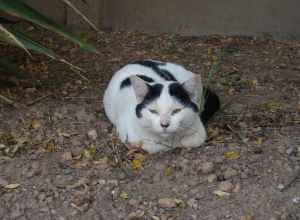 On Monday I took him to the vet and she did the kind thing and put him gently to sleep.

A few days later, I met someone who works in the vicinity and asked him if he knew whose cat it was.  At that point, a woman barged into the conversation told me there were a number of stray cats and that she was going to get a trap and take them to the SPCA to be euthanased.  She waved in the general direction of my property.  I said the cats over there were mine and they were very well fed and sterilised.  “Sterilising doesn’t stop them pooping everywhere” said she.

Er…. hello?  Cats that eat on a regular basis are known to poo.  Starved cats are not known to poo because there’s nothing going in.  Our country is in crisis, our town is brimming with sick and starving dogs and cats, our waste dump is overrun with pigs chewing on plastic, but a little cat poo is a the biggest problem we have right now.

I must just point out that my cats do on occasion go into her property to poop, but it’s hardly a garden.  It’s an empty piece of land strewn with bottles and chip packets and polystyrene food containers that end up in my yard whenever the wind blows.  Must also point out that the person standing in the street haranguing me used to be in charge of animal welfare for the town.  Someone in charge of the welfare of the town’s animals has no compassion for them, can walk past a starving sick animal to grab someone’s healthy sterilised ones.  Have I dropped down a rabbit hole without noticing? 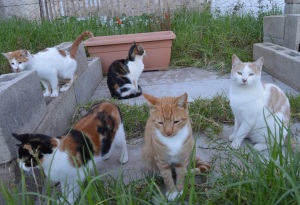 Such a hard kitty life.

In all fairness, animal welfare are expected to operate with virtually no money.  They do mass sterilisations and dipping and are authorised to euthenase.  But for some reason absolutely nobody in town saw this poor sick cat and called them to put him out of his misery.  This isn’t the first emaciated cat that has walked through that empty piece of ground.  There was a ginger one that I tried to catch and ended up feeding up until he looked rather handsome.  Yet another cat they failed to see criss-crossing their empty piece of ground, so intent were they on looking for evidence of animal digestion. 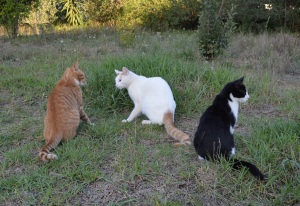 So much suffering in this world.

When I objected to my healthy animals being trapped, she said she would call me to collect the ones that were mine.  In other words, I would be “allowed” to rescue my own cats from being put to death and allow them to continue to poop in her empty piece of ground.  In other words, this has nothing to do with poop at all!!!!!

Let me also point out that a year ago I went to the owner of the property behind me and asked them to request animal welfare to trap the numerous kittens there as they were small enough to be adopted out and, if left, would end up joining the starving cats roaming the neighbourhood.  First I was told they were coming, then they weren’t coming, then they didn’t have a trap.  They’re still there, grown up and starving and the mating and kitten production continue unabated.

It’s raining and right now, ten of my fourteen cats are lying on the warm bed, tummies full and unaware that the people in charge of animal welfare are intent on destroying them.  In the meantime the suffering and starvation continue without end.

5 Responses to Downside of country living – Part 72 (or whatever)